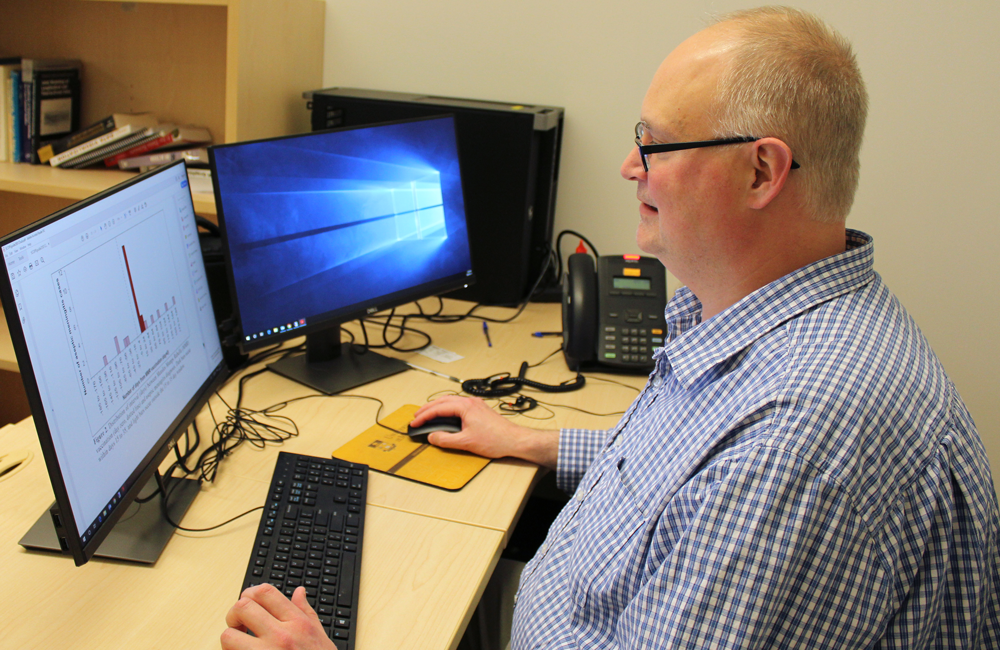 Dr. Joseph (Chris) Delaney, associate professor in the College of Pharmacy, says one of his hobbies is solving difficult statistical modelling problems.

It’s a good hobby to have when your specialties include pharmacoepidemiology (the study of the use and effect of drugs in large groups of people), epidemiology methods, health services research and drug safety.

“It’s very much like detective work,” says the scientist. “I’d do it for fun if I wasn’t lucky enough to have it as a job.”

Delaney is the kind of researcher who mines insights from computer-based analyses of health data. By running complex statistical comparisons within large datasets, he reveals evidence – for example, that a drug taken for one disease increases the risk of another disease, or that the interaction between two medications raises the risk of a particular side effect.

He often conducts multiple studies of the same set of data. For instance, he says, “I’ve participated in 29 papers based on data from the Multi-Ethnic Study of Atherosclerosis, a study of hardening of the arteries in more than 6,000 people in the U.S.”

He is working with Dr. Sherif Eltonsy on developing evidence-based pharmacy courses for the new Doctor of Pharmacy (PharmD) undergraduate degree program, which has replaced the bachelor of science (pharmacy) program. We spoke with him about his dual focus on evidence – in his research and in educating future pharmacists.

Tell us about your research background.

I started as a database pharmacoepidemiologist with a focus on statistical methods. I progressed to focusing on cardiovascular disease in general, moving beyond just the benefits and consequences of drugs.

What will your research focus be at UM?

I’m moving back into databases. Manitoba’s population databases, housed at the Manitoba Centre for Health Policy here at U of M, are among the best in the world.

These databases give us an amazing laboratory for understanding the reasons for and patterns of drug use in the general population, as well as the benefits and harms of drug use. Because we can link data from a range of government programs, we can begin to understand things like how life circumstances and poverty might interlink with access to, and willingness to use, pharmaceuticals.

I’m also involved in a study of Ontario databases, looking at side effects of fluoroquinolone antibiotics.

How important is evidence-based pharmacy to the new PharmD program?

Compared to the bachelor’s program, there’s a much stronger research component to the PharmD program, and a much heavier engagement with the research literature. The requirement for students has increased from one to three courses in evidence-based pharmacy.

It’s essential that we graduate pharmacists who know how to locate the most up-to-date research, critically evaluate whether findings are valid, and ensure that their daily decisions about patient care are based in solid science.

We need to give them the tools to understand the different kinds of studies, such as systematic reviews, meta-analyses and randomized controlled clinical trials. We’re fighting to equip students to properly interpret observational research – it’s really important to give them a rigorous education so they can evaluate these studies.

What attracted you to the University of Manitoba?

What drew me here was how incredibly strong and dynamic the research in the pharmacy college is. The faculty members are smart, hard-working and methodologically rigorous. I was pleasantly surprised to realize that people whose papers I’ve read and thought “This is a really smart person” were actually here in Manitoba.