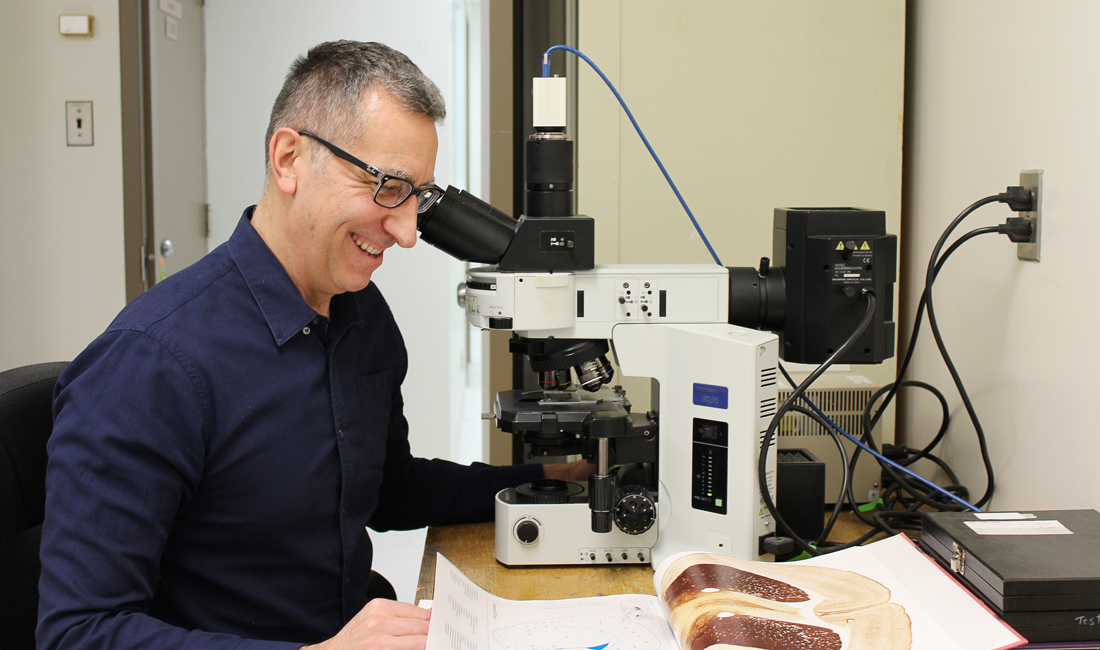 IMAGINE THAT YOU MOVE TO A NEW CITY. When you venture to ride the subway for the first time, you’re robbed on the train platform.

Although you’re not physically hurt and you understand that such crimes are rare, you can’t get past the trauma of the experience. You want and need to use the subway, but each time you try, you’re flooded with crippling fear and anxiety.

What’s going on in your brain when you feel this powerful aversion? How does the brain translate the memory of an emotionally charged event into avoidance that sometimes becomes unhealthy?

Neuroscientist Gilbert Kirouac [BA/88, M.Sc./92, PhD/95] is working on that puzzle. His research focuses on a region of the thalamus – a small structure near the centre of the brain – called the paraventricular nucleus of the thalamus (PVT). He has discovered that this region is an important hub in the brain circuits that produce emotional responses to stress and pain.

“I’m interested in emotion,” says the scientist. “Our emotions and motivations form the essence of who we are as individuals.”

Kirouac, a three-time U of M alumnus, is the foremost international expert on the PVT. In a series of papers from 2005 to 2019, his research team was the first to describe its anatomical and functional position in the brain’s emotional circuits and its role in fear and anxiety.

“It’s been rewarding to see the PVT become a hot area of research,” he says.

Kirouac has found, through experiments with rats, that the neurons that form the PVT are activated by stress. They’re important for relaying signals for negative emotions, like the fear and anxiety associated with a traumatic event.

In one study, Kirouac’s team surgically interfered with these neurons in rats that had undergone “fear conditioning.” After the surgery, the rats were less avoidant of what they had previously learned to fear.

The professor hopes that a better understanding of these brain mechanisms will lead to new treatments for illnesses such as posttraumatic stress disorder (PTSD) and anxiety disorders.

Many people are surprised to hear that Kirouac is a professor in the department of oral biology at the Dr. Gerald Niznick College of Dentistry. The department includes a number of academics whose fields of study involve biomedical research beyond the oral cavity.

Anastasia Kelekis-Cholakis [DMD/92, Dip. Perio/98], dean of dentistry, says Kirouac’s expertise is an asset to the college. “His knowledge and research are important not only in training dental students, but also in our graduate oral and maxillofacial surgery program,” she says.

The Franco-Manitoban Kirouac was raised in La Broquerie, Man. His first U of M degree was in psychology. “I wanted to be a clinical psychologist,” he says. “But after taking some courses in the neural basis of behaviour, I decided that neurosciences would give me a deeper understanding of the human psyche.”

All of his research uses rodent models. “The parts of the brain that control emotions and motivation are the same, regardless if you’re a rat, a primate or a human being,” he says. “That’s been confirmed by brain imaging in humans.”

His lab team puts rats through “stress episodes” and behavioural experiments to model human psychiatric illnesses, including anxiety disorders and PTSD. “We see individual differences, just like with people,” he says. “We use mazes to measure how anxiety prevents the fearful rats from taking risks.”

Kirouac also uses cutting-edge techniques to analyze brain circuitry and manipulate the activity of neurons in rodents’ brains. One of his findings is that a neurochemical called orexin contributes to stress-induced anxiety.

“There are drugs on the market now that block orexin to treat insomnia,” he says. “We’ve shown that blocking orexin receptors in the brain and PVT has potential for treating anxiety disorders. Now we want to learn more about how the PVT controls emotional responses and identify some of the key neurochemicals and receptors involved.”

Perhaps because of his fascination with feelings, Kirouac is interested in how non-scientists conceptualize the brain’s workings. With other members of the Manitoba Neuroscience Network, he enjoyed participating in Neurocraft, a 2016 project in which artists took inspiration from neuroscientists.

He was paired with artist Peter Tittenberger, who interpreted Kirouac’s research by sculpting ceramic and mixed-media creatures called “thalamuses.” The beasts were covered with quill-like projections that seemed to both reach for connection and form a protective barrier, perhaps suggesting a state of anxiety.

Kirouac often acts as a consultant, formally and informally, on studies of the PVT. He has formed many international ties in his field, particularly in Australia and the U.S., and since 2010 has collaborated with the Institute of Psychology at the Chinese Academy of Sciences in Beijing.

“That’s the most enjoyable part of my career,” he says about these global connections. “They’re often my competitors, but they’re also my friends.”

One neuroscientist at the University of Texas who used to be Kirouac’s rival is now his research partner. “We were trying to outdo each other,” he says, “but we’ve started collaborating instead.”