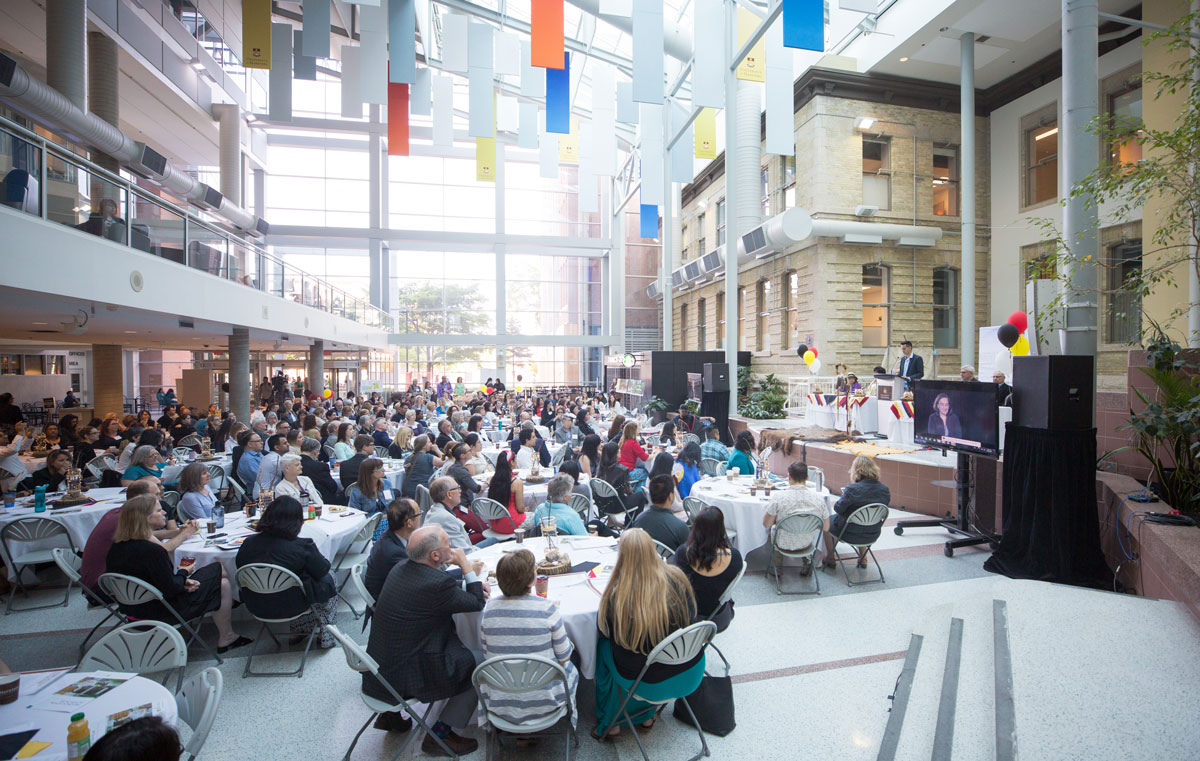 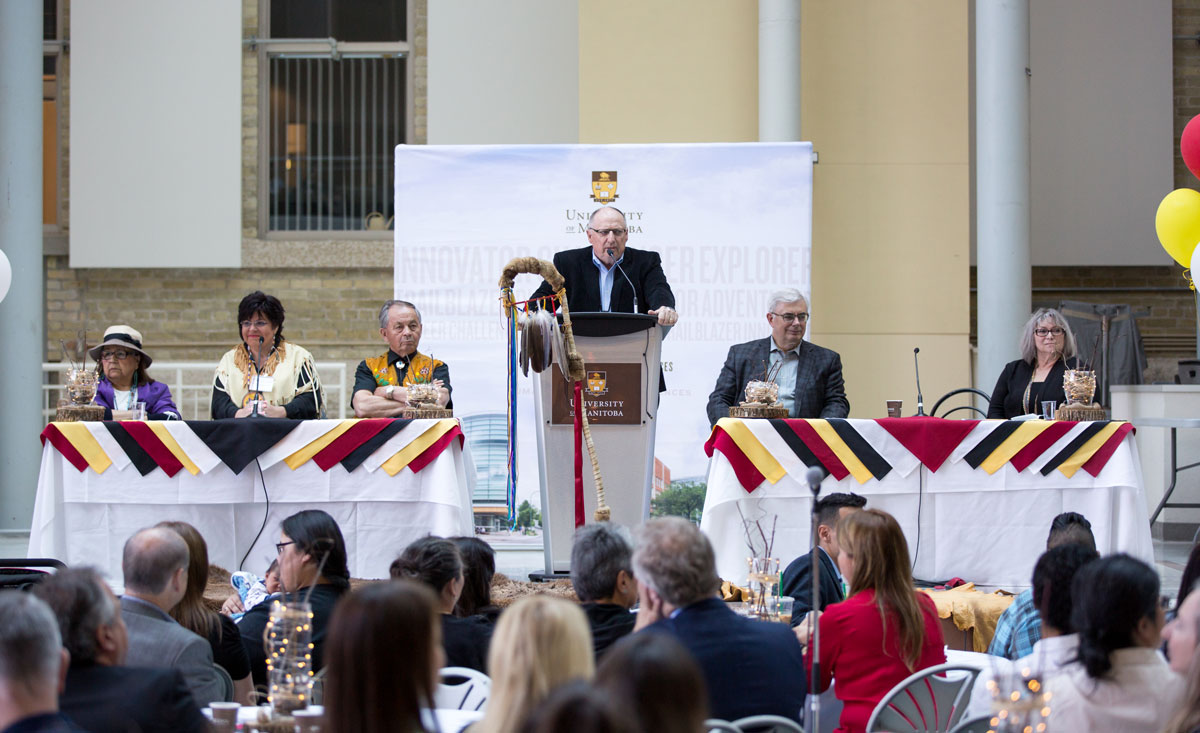 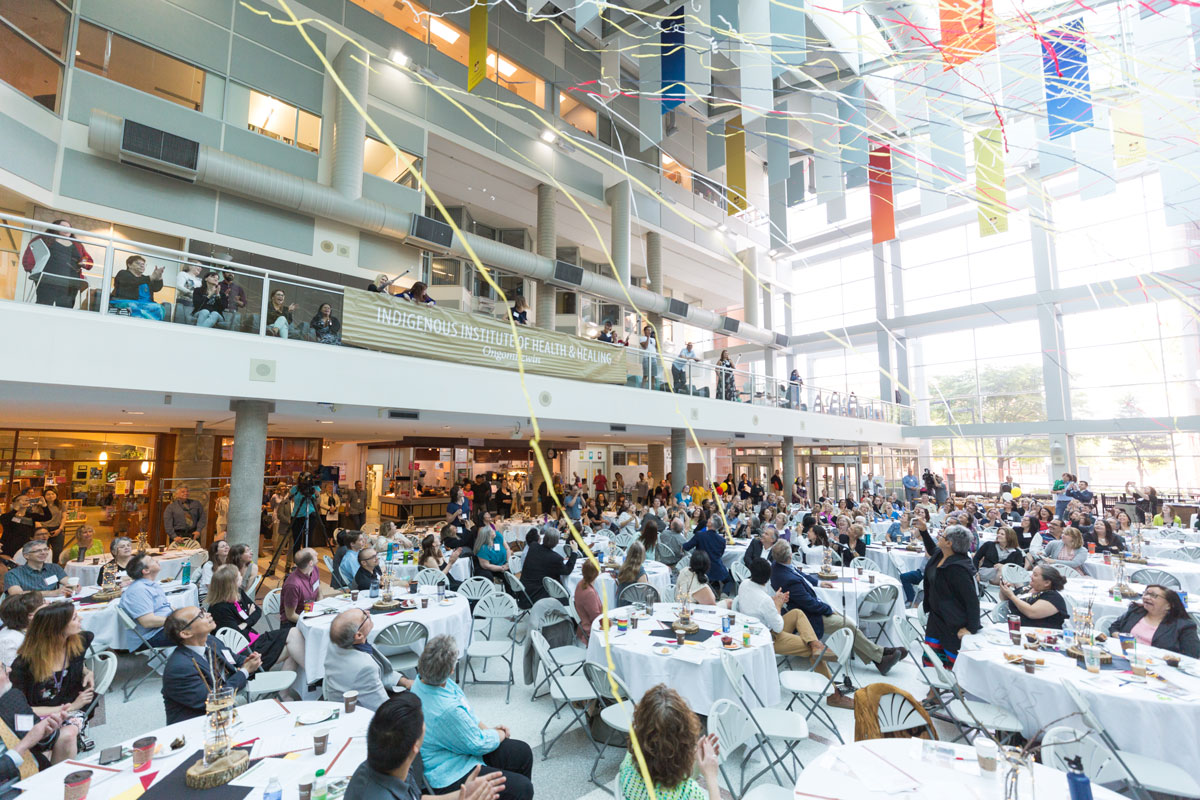 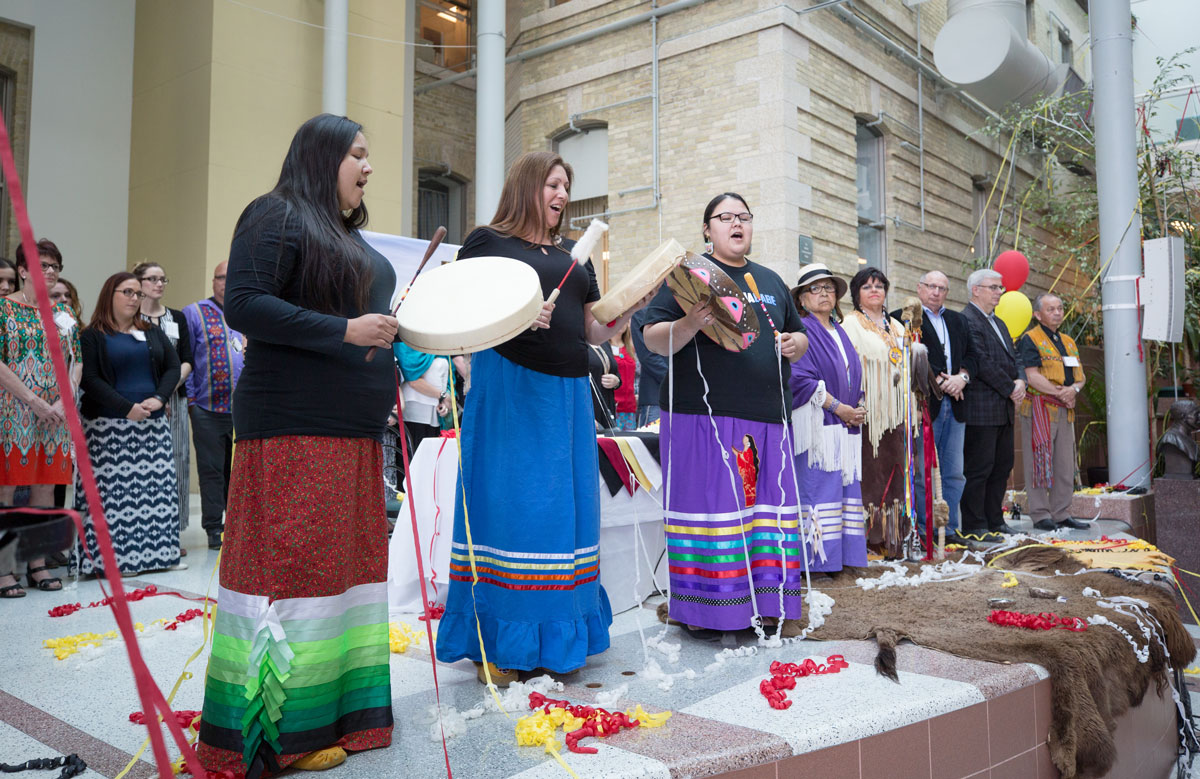 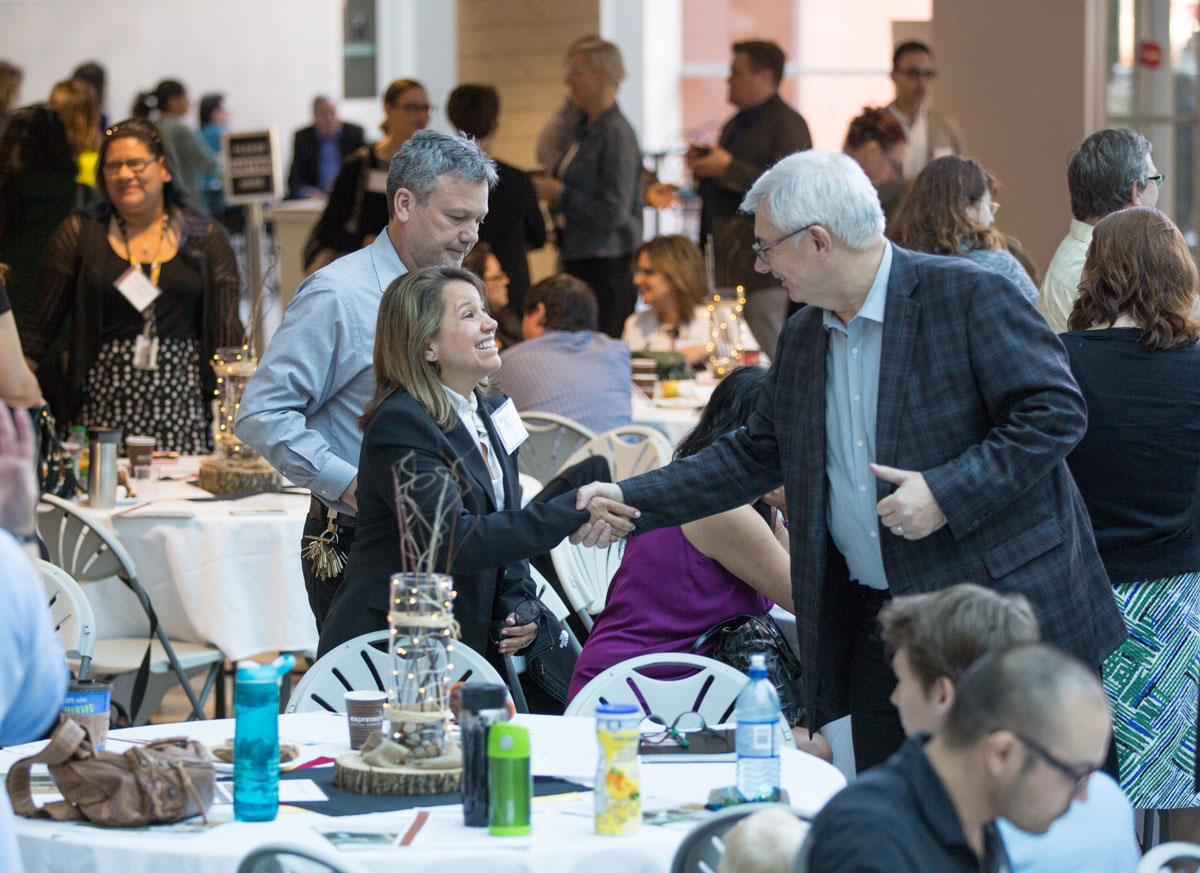 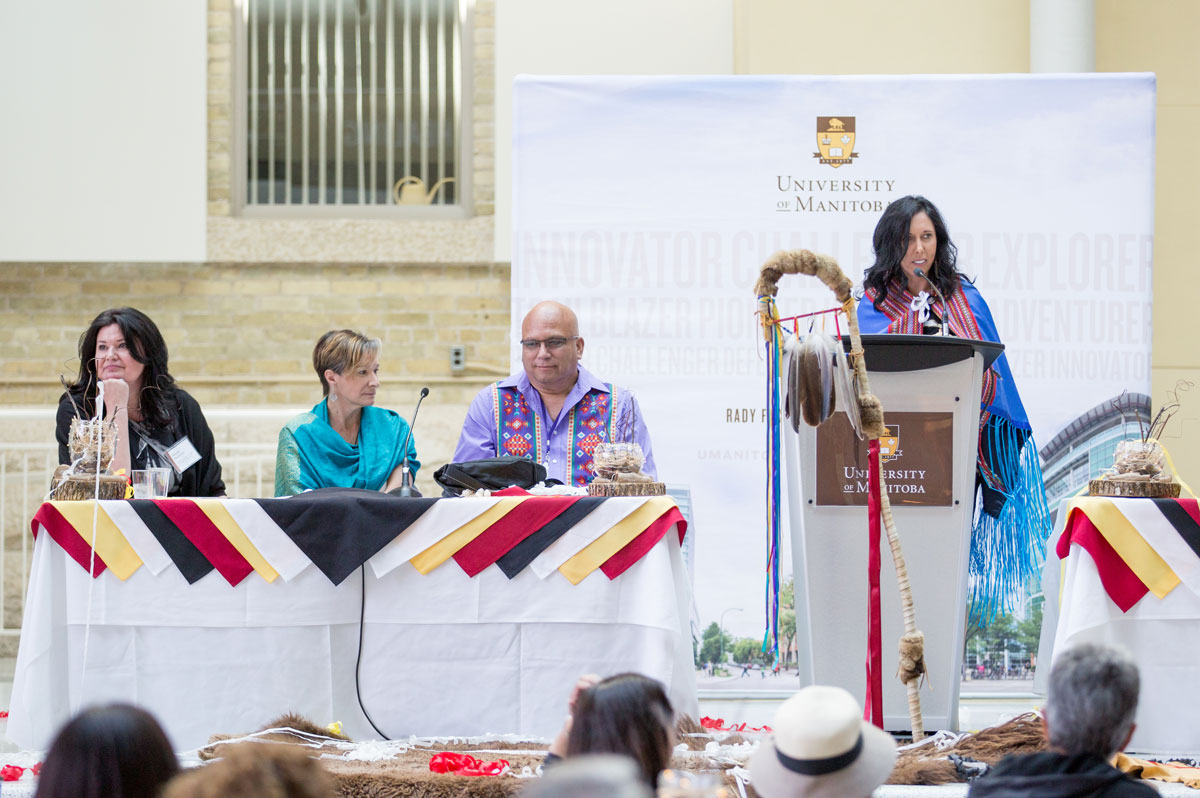 New institute clearing a path for generations to come

On the morning of June 2, a special day in the life of the university began with a ceremony in the Medicine Garden/Mashkiki Gitigaan on the Bannatyne campus. With a pipe and tobacco, Elders and Knowledge Keepers guided the historic launch of the Indigenous Institute of Health and Healing – Ongomiizwin.

A pipe ceremony set the tone, with drumming and burning sage. The crowd that stood shoulder-to-shoulder in the Medicine Garden was still and quiet through the prayer and giving of thanks, but warm hugs and laughter quickly broke out as the ceremony ended.

It was a time of joyous celebration, because in the university’s 140th year, Indigenous knowledge and guidance became a formally recognized part of the Rady Faculty of Health Sciences with the creation of Ongomiizwin, the largest Indigenous education and health unit in Canada in terms of scope and mandate.

“I would not have imagined this a long time ago, when I was growing up in Sagkeeng,” said Elder Margaret Lavallee.

Now called Ongomiizwin – Research; Ongomiizwin – Education; and Ongomiizwin – Health Services, the combined institute will advance excellence and provide leadership in research, education and health services in collaboration with First Nations, Métis and Inuit communities. Its work will be guided by Indigenous Knowledge Keepers and Elders.

“This day we are celebrating new beginnings,” said Elder Mary Wilson. “Today is an amazing day where we can bring our energy together.”

Ongomiizwin/Clearing a path for generations to come affirms the university’s commitment to building respectful relationships and creating pathways to Indigenous health, healing and achievement, noted University of Manitoba President and Vice-Chancellor David Barnard.

“We take pride in the story of our founding benefactor, Métis scholar Alexander Isbister,” Barnard told the crowd of more than 300 guests assembled in the Brodie Centre to celebrate the launch. “He embodied the Indigenous teaching that urges us to look ahead many generations as we think about important decisions.” 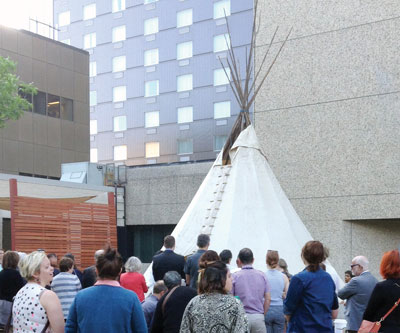 With the creation of the new institute, Barnard said, the university reaffirms its commitment to providing a place where Indigenous students can thrive and where we can begin to address the harms of our colonial history.

“We know that the success of Aboriginal people and communities is vital for the health and well-being of our province and our nation,” he added.

Brian Postl [MD/76], vice-provost (health sciences) and dean, Rady Faculty of Health Sciences, described the journey to Ongomiizwin as a long one, reaching back to the 1960s, when Dr. J.A. Hildes championed the idea of a medical unit to serve the North. Since the unit, named after Hildes, opened in 1970, it has become nationally and internationally recognized as one of the most successful models of service delivery to remote northern populations.

“It’s a remarkable set of achievements over 50 years,” said Postl. “It’s really the culmination of all those years of work that have brought us to this stage of our evolution.”

Ongomiizwin provides leadership in Indigenous health across the five colleges of the Rady Faculty of Health Sciences (dentistry, medicine, nursing, pharmacy and rehabilitation sciences) in the areas of education, research and health services.

Cook, smiling from ear to ear, opened her remarks with one simple statement: “This is beyond my wildest dreams.”

Those words brought thunderous applause from the room. Cook then told her story of leaving her traditional Métis community as a young woman and experiencing daily racism. She focused on her education, discovering medicine through one of the university’s Access programs.

“We know that the success of Aboriginal people and communities is vital for the health and well-being of our province and our nation.”

“The biggest motivator for success was not only the support of our allies, but our peers,” said Cook. “Having other students from the Indigenous community, working together, studying together, that made all the difference.” It has become Cook’s mission to ensure that students have that same safe space to learn and build their own dreams.

The day also included an introduction to the Rady Faculty Reconciliation Action Plan. As part of its mission, Ongomiizwin will lead the implementation of the plan, developed in response to the health-related calls to action made by the Truth and Reconciliation Commission (TRC) of Canada.

“Through a structured process of reconciliation, Ongomiizwin will work to break down barriers to health profession education and close the health-care gaps between First Nations, Métis and Inuit peoples and all other Canadians,” said Dean Postl.