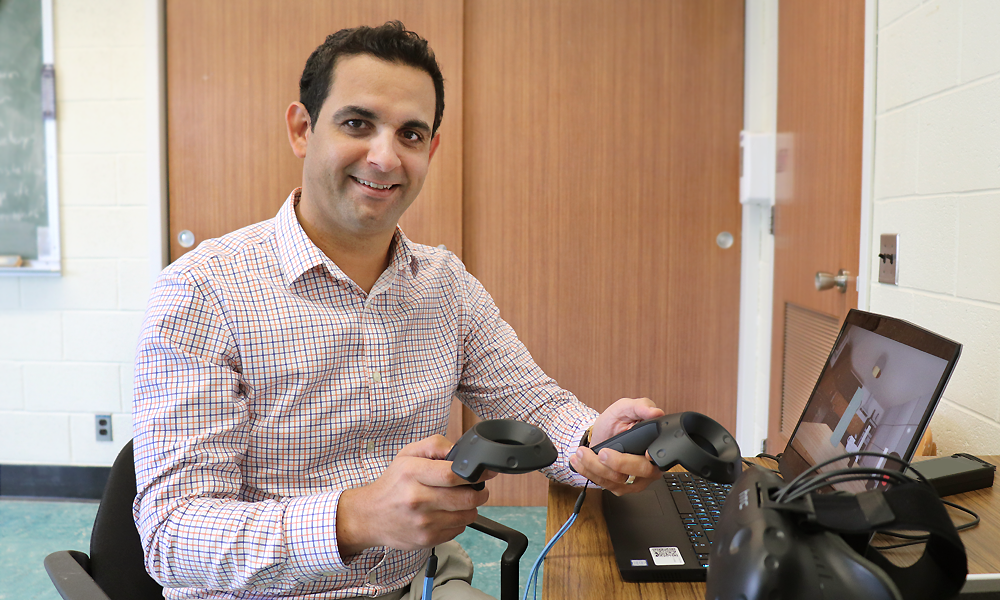 The potential of these tools, he says, has come into sharper focus in the COVID-19 era.

“Now that people are at home 24 hours a day, seven days a week, it’s easier to see the benefits of virtual communication, tele-monitoring and smart home technology,” says the assistant professor of occupational therapy in the College of Rehabilitation Sciences.

Born and raised in Tunisia, Choukou comes from a family of educators. He has three siblings who went into biology, gynecology and engineering, so it’s not surprising that he took an interest in both health and technology.

He moved to France in 2002 and earned a PhD in human kinetics in 2012 from Paris-Sud University. He then relocated to Quebec City to attend Laval University as a postdoctoral fellow, where his interest in research intensified.

“I had many great mentors there who showed me what it would be like to be a full-time researcher,” he says.

At Laval, Choukou’s work was supported in part by AGE-WELL, a national technology and aging network, where he worked with a group developing a simulator for training people to use power wheelchairs. He also developed a relationship with Mitacs, a non-profit national research organization that continues to fund his work.

Choukou joined UM in 2018 in a research-intensive faculty position, focusing primarily on technological solutions for people living with dementia or those who have suffered a stroke.

He has first-hand experience of how a person’s cognitive challenges can affect the quality of life of their family members, which influenced his research into solutions for both those who live with impairments and their caregivers.

“My aunt was diagnosed with Alzheimer’s five years ago, and the diagnosis had a big impact on the family,” he says. “My cousin had to leave her job and sacrifice most of her personal time to take care of her.”

He’s also inspired by a vision to keep patients out of the hospital system as long as possible by providing some services remotely.

“The elderly have the right to age at their preferred home. It’s up to us, as a society, to help them preserve independence and live with dignity. Technology can help achieve this by enabling access to care and family engagement.”

Among the professor’s projects is a computer platform that will be used in the experimental Smart Suite being constructed by UM researchers at Health Sciences Centre. The Smart Suite is a replica apartment equipped with a variety of sensors to monitor the activities of people in the space. If anomalies are detected in a person’s behaviour, the system can alert caregivers.

“Living spaces with this monitoring capability would allow outpatients to stay at home as long as possible, rather than go back and forth to hospital,” Choukou says.

He is also developing a virtual platform offering people who have suffered a stroke and been discharged from hospital further training to rebuild their physical and cognitive abilities. The solution would work well in rural and remote communities, where patients usually have to travel for rehabilitation.

“This platform consists of a laptop and virtual reality headset. You could have it at home, or you could go to a community centre for virtual treatments and practice.”

Using 3D depth cameras, Choukou and his team have also developed a platform that can record video data and use software to detect hazardous behaviours or situations for people living with dementia. The system uses its own image-recognition intelligence to recognize an altercation or fall and send an alert to caregivers.

“The high priority right now is the security and safety of the data we collect,” Choukou says. “The health-care professionals and families I’ve spoken to are supportive of these solutions, as long as they are ethically sound.”