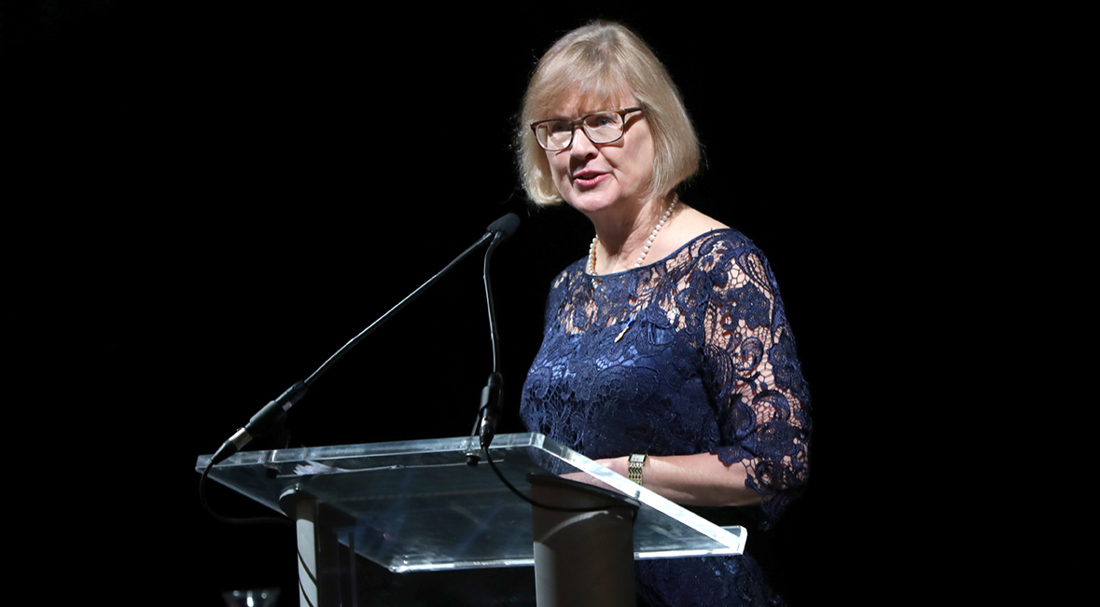 THE PROFESSION OF NURSING has always adapted to social change and technological advancement, a renowned alumna of the College of Nursing said in her keynote speech marking 75 years of the college’s history.

And nursing will remain relevant in an era of high-tech health solutions – from wearable health monitors to treatment based on personal genetics – because patients will always need empathy, compassion and support.

“People want to talk with people. To be healthy and happy, we need empathy,” Dr. Linda Kristjanson [BN/77, MN/83], president and vicechancellor of Swinburne University of Technology in Melbourne, Australia, told 250 alumni, faculty and guests at a gala anniversary dinner on the Fort Garry campus during the 2018 Homecoming weekend.

“While nurses of the future will find their work enriched by technological solutions, the art of caring – the knowledgeable connection between people in times of illness, crisis, stress and uncertainty – will remain vital.”

Of more than 9,000 nurses and nurse leaders who have graduated from the U of M since 1943, few have accomplished as much, at such a distance from Manitoba, as Kristjanson.

She earned her bachelor of nursing in 1977 and her master’s in 1983 at the U of M (when, as she recalled, the School of Nursing was located in the now-demolished Bison Building).

She went on to complete her PhD in nursing at the University of Arizona. In an academic career spanning Australia, Canada and the United States, she developed particular research expertise in palliative care.

Kristjanson is an Officer of the Order of Australia in recognition of her distinguished service to postsecondary education through leadership and governance, strategic and innovative university reforms, contributions to cancer research and palliative care, and to women.

“The world will continue to need well-educated nurses, courageous and proactive nursing leaders, and sound research evidence to inform health-care policy and practice,” Kristjanson said. “The future College of Nursing will be a place where technology and humanity meet.” ‘

U of M President and Vice-Chancellor Dr. David Barnard told the audience at the gala, “You are part of a rich history…. The caregiving spirit is intrinsic to the work you do.”

Earlier in the day, about 60 alumni and guests gathered at the Helen Glass Centre for Nursing for a tour and reception. They heard how the U of M started training 18 nurses in certificate courses in 1943. Today, the college is part of the Rady Faculty of Health Sciences and boasts an enrolment of about 1,000 students in bachelor’s, master’s and PhD programs.

“The past 75 years have been filled with innovative and collaborative nursing education, as well as research and scholarly initiatives,” said Dr. Netha Dyck [BN/88], dean of the College of Nursing. “We have an amazing legacy that we truly cherish.”

The tour included the college’s Manitoba Centre for Nursing and Health Research, which has been a catalyst for nursing-led research since 1985. Currently, 30 faculty members are actively engaged in research.

While viewing the state-of-the-art Simulation Lab and Skills Lab, alumni were fascinated to see how technology enables today’s students to hone their skills by “caring for” remarkably lifelike, computercontrolled manikins.

As part of simulation-based learning, students can practise everything from assisting in childbirth to giving injections on these realistic “patients.” “It’s a long way from an orange!” exclaimed one alumna, prompting others to reminisce about poking needles into fruit – and then into classmates’ arms – to develop their proficiency.

Retired nurse Elaine Szymanski [BN/72] was marking exactly 50 years since she arrived on campus in 1968 to start her bachelor of nursing. “We had to go up to the top floor of the Administration Building for our nursing classes – and there was no elevator,” she recalled.

Like many of her classmates, Szymanski was already a nurse, but came to U of M to upgrade her education, having completed her diploma in 1964 at the St. Boniface General Hospital School of Nursing. Her comments after the tour highlighted the same theme as Kristjanson’s speech.

“Everything’s become a lot more sophisticated with all the technology,” she said. “But nothing replaces the real patient and real human contact.”

Guests on the tour included Susan Glass, the daughter of Dr. Helen Glass [Cert.Nurs.(T&S)/58], the former director of the School of Nursing in whose honour the Helen Glass Centre for Nursing and Helen Glass Research Symposium are named.

Helen Glass, a leading figure in Canadian nursing, passed away in 2015. Asked how her mother would have felt about the 75th anniversary, Susan said, “I think she’d be incredibly proud. She would also be very proud and touched that I’ve had so many people say to me what an influence she was in their lives.”

The 75-year milestone has been commemorated with the establishment of a 75th Anniversary Legacy Awards Fund to provide student scholarships. Susan Glass and the Irene E. Nordwich Foundation were acknowledged for their generous contributions to the fund.