Donations in memory of a distinguished U of M scientist and educator have allowed a professorship in his name to be upgraded to a chair.

In 2016, the Dr. Lyonel G. Israels Professorship in Hematology in the Max Rady College of Medicine was announced by Bayer Inc. and the Israels family. The corporation and the family each gifted $1 million to establish the funded position in honour of Lyonel Israels [MD/49, M.Sc./50].

Israels (1926-2003) served as the influential head of hematology/oncology at the U of M for 27 years. His wife, Esther Israels [MD/50, M.Sc./58], was also a hematologist. Their daughter, Sara Israels [MD/79], followed them into hematology and is now professor of pediatrics and child health and vice-dean, academic affairs of the Rady Faculty of Health Sciences.

With a recent contribution of $1 million from the department of internal medicine and 70 individual gifts totalling more than $175,000, the professorship has become an endowed chair.

The purpose of the Dr. Lyonel G. Israels Chair in Hematology, which has a term of five years, is to provide leadership, scholarship and mentorship in the areas of benign and malignant hematology and immunology. 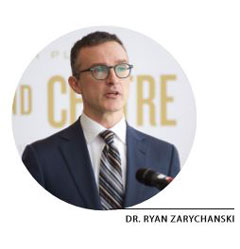 Dr. Ryan Zarychanski [B.Sc.Med./00] has been the first researcher to hold the professorship. The associate professor of internal medicine is a hematologist, critical care physician and clinician-scientist. He is a senior scientist with the Research Institute in Oncology and Hematology.

“I had the opportunity to work with Dr. Lyonel Israels when I was a doctor in training,” Zarychanski recalls. “It’s an honour to hold a professorship that bears his name, and to be involved in carrying on his legacy.”

The professorship has made it possible for Zarychanski to train up-and-coming clinician-scientists. It has also helped him to launch an international clinical trial, led by the U of M, that is evaluating whether an inexpensive blood-thinning drug can improve survival for patients with septic shock.

Gayle Halas [Dip.D.Hyg./87, PhD/16] has been appointed the inaugural Rady Chair in Interprofessional Collaborative Practice for the Rady Faculty of Health Sciences.

The chair is funded by a portion of the $30 million gift made by philanthropists Ernest and Evelyn Rady in support of health sciences at the U of M.

The role of the Chair in Interprofessional Collaborative Practice is to build upon collaborative relationships between educational and practice systems, thereby promoting excellence in patient care, quality and safety.

Halas is a health-care researcher, educator and leader. She has been a member of the U of M education and research community since 1999, first as an instructor in dental hygiene and more recently as an assistant professor and research director in family medicine at the Max Rady College of Medicine.

“When you’re dealing with complex health-care issues, there’s great value in a team approach, capitalizing on the expertise that various providers bring,” Halas says. “I’ll be leading research focused on interprofessional collaboration, and what effect that has on patient care.”

Halas holds a diploma in dental hygiene from the U of M and a master’s degree in integrated studies from Athabasca University. She returned to the U of M to complete a PhD in individualized interdisciplinary studies in 2016.

She has directed the Manitoba Primary and Integrated Health Care Innovation Network, which connects people, resources and opportunities for research and knowledge-sharing.

In 2018, Halas was honoured by the U of M School of Dental Hygiene Alumni Association with its Alumni of Distinction Award.

In addition to holding the five-year chair, Halas has been appointed assistant professor in the School of Dental Hygiene.

A new professorship has been established in memory of Rudy Falk [B.Sc.Med./60, MD/60] and two of his patients, John F. Bassett and Bruce Beauchamp.

Falk, a U of M alumnus in medicine, became an influential Toronto surgeon, professor at the University of Toronto and director of the Falk Oncology Centre. He died in 1998.

A U of M endowment in memory of Falk and his two patients was established in 2000 to fund a clinician-scientist award. The endowment is now large enough to support a professorship, with matching funding from the awardee’s department.

The three-year professorship is designed to support an early-career clinician-scientist who has a proven record in research, allowing him or her to establish a research program at the Max Rady College of Medicine. 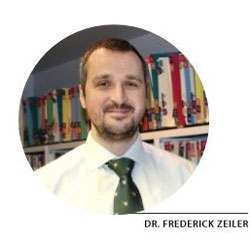 Frederick Zeiler [B.Sc./05, MD/10], a neurosurgeon whose research focuses on traumatic brain injury, is the first recipient of the Rudy Falk Clinician-Scientist Professorship.

Zeiler, a U of M medical alumnus, is assistant professor and director of neurosurgery research in the U of M department of surgery. He holds a PhD from the University of Cambridge and is a guest researcher there, and at Sweden’s Karolinska Institute.

His goal is to uncover the mechanisms involved in the dysfunction of cerebral auto regulation after moderate or severe traumatic brain injury.

Zeiler plans to establish innovative methods for multi-modal monitoring of patients with traumatic brain injury in the intensive care unit at Health Sciences Centre. This will be one of the most advanced monitoring systems in the world for this type of patient.

Another goal is to develop the world’s most comprehensive database of medical information about traumatic brain injury patients.

“With the support provided by the Rudy Falk ClinicianScientist Professorship, we are laying the foundation for the U of M to become a world-leading institution in traumatic brain injury research,” Zeiler says.