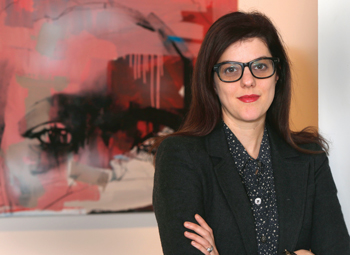 But it was imagining the plight of individual children that motivated her to research child maltreatment and find ways to prevent it.

While at the master’s level, “I started to think about how some children experience such horrible things, and how they might carry that with them across their lifespan,” she says. “The idea of helping one child, and then hopefully many children, became a driving force for me.”

The Winnipeg-born Afifi earned all three of her degrees at the U of M. Trained in epidemiology and population health, she is an associate professor of community health sciences and a research scientist at the Children’s Hospital Research Institute of Manitoba. Since joining the faculty in 2010, the prolific researcher has often made headlines with her findings.

She and her colleagues published the first nationally representative data on child abuse in Canada, which reported that as children, 32 per cent of Canadians have experienced physical abuse, sexual abuse, or been exposed to their parents’ or guardians’ violence.

The study found strong relationships between child maltreatment and later mental health problems, such as depression, suicidal behaviour or substance use disorders, in adulthood.

Afifi has become an internationally recognized expert on child abuse and neglect, and related harms. We spoke with her soon after it was announced that she is the Canada-wide winner of this year’s $100,000 Royal Mach-Gaensslen Prize for Mental Health Research.

If children who are abused are also living with poverty, poor housing and other stresses, how can you be sure the abuse is specifically linked to later mental illness?

When we analyze data, we control for many sociodemographic characteristics and household dysfunction. After those adjustments, there’s still a very strong relationship between child maltreatment and mental health conditions in adulthood.

Abused children can grow up in a hyper-arousal state – constantly on guard. That can create chronic stress and anxiety, affect brain development, and lead to negative coping behaviours. And when you grow up with abusive relationships, you may be more likely to perpetrate violence, or accept it from others.

It’s interesting that members of the Canadian Armed Forces are more likely to have experienced child abuse than the general population, and we’re finding the same for first responders. We’d like to better understand how experiencing childhood trauma relates to career-related trauma in these jobs, and how that may affect mental health.

What will the Royal Mach-Gaensslen Prize allow you to do?

I’m interested in learning from individuals who have experienced child maltreatment, but despite that, seem to be resilient. I want to know what protective factors may have contributed to that resilience.

We’ve completed a survey of the experiences and well-being of 1,000 Manitoba adolescents, including surveying one parent of each. We’ll be linking those results with data at the Manitoba Centre for Health Policy, allowing us to understand relationships between adversity and outcomes such as how these teens do in school.

The prize funding will let us return to these survey participants for more data collection. We’re interested in learning about other adverse experiences, such as bullying. We’re asking the teens about their visions and hopes for the future, because often if you are abused, you think you don’t have control over your future.

We’re looking at things like the teens’ school experiences, screen time, social supports, relationships and coping strategies. We hope to start showing evidence for what is protective at the individual, family, school and community levels.

You’ve taken a public stand on the issue of whether spanking should be illegal in Canada. Why?

It’s heartbreaking that Canada is not among the 54 countries that have legally banned spanking. You can’t refute the data: there’s not one study showing that spanking is beneficial to the child. There are thousands of studies showing that it is harmful.

It’s a human rights issue. In Canada, children are the only ones not protected from violence by law. Legal bans in other countries haven’t led to more prosecution of parents for spanking. They have provided opportunities to intervene earlier to help families that need support. It’s so important to help parents replace spanking with non-physical forms of discipline.